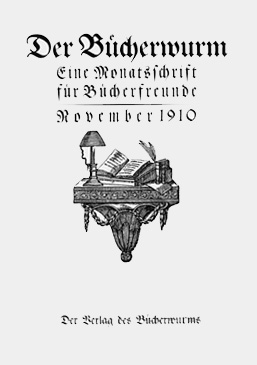 The journal Der Bücherwurm, which was originally edited by Walter Weichardt and the later by Karl Rauch, can be included in the circle of the so-called conservative revolutionaries.

The introduction to the first issue renounced explicitly «many promises». «It is our wish to be a friend to the book lover who reports to him briefly, stimulatingly factual and clearly on everything to do with books.»

In reality the journal went far beyond this humble claim. The artistic presentation of the magazine played a central role from the very beginning: Often a single artist was commissioned to produce the illustrations for a complete issue thereby endowing separate issues with a bibliophile character.

The journal continued in existence until April 1943 and the content was, until the end, defined through a multitude of differing weltanschauung, which may well have been responsible for its longevity.