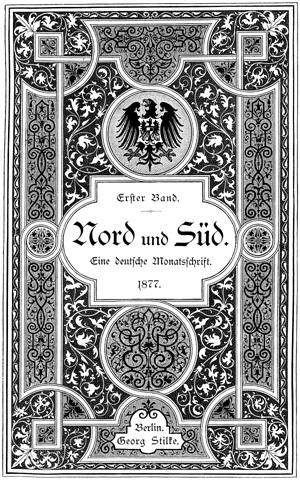 The German magazines of the revue and «Rundschau» style arose around 1870. Julius Rodenberg’s Deutsche Rundschau not only gave its name to this genre but also set the standard for content and structure.

Two magazines published by Paul Lindau demonstrate the range of the genre. The weekly Gegenwart was on the fringe of the actual daily newspapers whereas the monthly Nord und Süd represented the transition to a family journal but was not regarded as an entertainment rag.

The style and presentation of Nord und Süd was that of a revue dedicated to literature, academia and art. The contents were a mix of original literary contributions, benevolent critical presentations of individual authors and long essays on factual issues oriented on the Deutsche Rundschau as role model. Paul Lindau managed very quickly to engage well known contributors from the world of literature and academia for his magazine and not least to poach them from other journals. Already in the first year the list of contributors contained names like Moritz Carriere, Ernst Curtius, Karl Goedeke, Paul Heyse, Rudolf Ihering, Wilhelm Lübke, Friedrich Pecht, Ludwig Pietsch, and Alfred Woltmann.

After more than thirty years publication Nord und Süd was temporarily discontinued in the 1920s due to war damage in the print works and because of an extended period abroad of the, then, publisher Ludwig Stein. Stein made an attempt to revive the journal in 1927. The subtitle was no longer «a German monthly» but «a monthly for international cooperation» and contributed more clearly than in the past to Stein’s «Programme for the mediation and understanding between peoples, races, confessions, classes and parties». The relaunch, however, was not blessed with a long lasting success. Nord und Süd finally ceased to appear with the September issue in 1930.