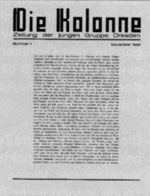 The «Zeitung der jungen Gruppe Dresden», that's the subtitle during the magazine's first year, belongs to the short-lived literary periodicals at the end of the Weimar Republic. Between 1929 and 1932 only 19 thin issues were irregularly published – only very few of the original copies are still available. There are no information on circulation which makes it difficult to say something about the magazine's sphere of activity. It was founded by A. Artur Kuhnert and Martin Raschke, and among its contributors are Emil Belzner, Richard Billinger, Günter Eich, Hermann Kasack, Horst Lange, Elisabeth Langgässer, Friedrich Schnack, Paul Zech, and Guido Zernatto.