Paul Lindau's weekly magazine Die Gegenwart can be viewed, in a certain sense, as the successor to Cotta's «Morgenblatt für gebildete Stände». 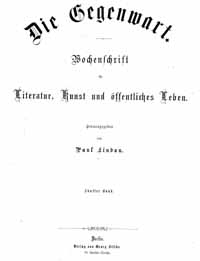 The, in 1872 in Berlin established, weekly periodical belongs to the oldest journals of the review type. The editior, Paul Lindau, saw its most important circle of readers amongst the «educated minority». In the first number he announced that the journal intended to review «all important publications out of area of public life and intellectual creation from a sensitive standpoint. We are also not prohibited in looking back into the past in order to be effective in the present and to strive for a better future».

The issues, which resembled a newspaper, contained political and economic essays on actual questions of the day with which the parliament was occupied, foreign reports and an extensive section containing questions on literature and art with literary and stage criticisms, essays, poems and articles about the fine arts and music.

Politically the journal was close to Bismarck and counted as an official paper not only under the first editor
Paul Lindau, but also under Lindau's successor Theophil Zollinger it was extremely Bismarck friendly. And so after Bismarck's fall, Maximilian Harden's famous Apostata articles also appeared first in the Gegenwart. A change in its political profile towards a liberal democratic point of view took place as Heinrich Ilgenstein took over as editor in 1912, at which time the, from him until then published, Blaubuch was also assimilated into the Gegenwart. Up to the outbreak of the war the Gegenwart had pleaded for peace, afterwards it too was dominated by the pro war fraction. Starting in 1916 discussion of peace, and after 1917 calls to rethink again, took up increasing space in the journal.

Before the elections to the National Assembly the Gegenwart defined its political position as conservative and distanced itself from the SPD. This changed visible during the following years: Compared to the attitude before the war the journal developed, until 1931, an ever widening strongly anti-socialist profile.

In the last years of its existence the Gegenwart was a forum for massive criticism not only of the emerging German National Socialism but also of other European fascist powers, above all the Italian fascism of Mussolini.

In 1931 without previous warning the periodical ceased to appear.