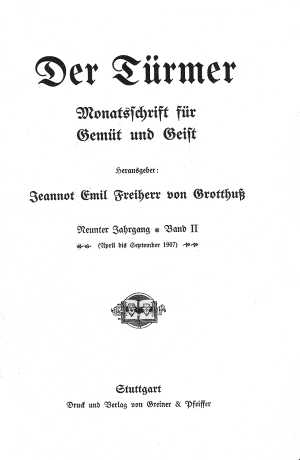 «Zum Sehen geboren, zum Schauen bestellt»: this dictum of the tower watchman Lynkeus, from Goethe’s Faust II graced, for more than thirty years, the heading of Der Türmer, a monthly journal «for Mind and Spirit». Lynkeus’ saying marked the journal’s claim: Not just to superficially watch the passage of time but to observe its deep underlying connections from a high vantage point. From the very beginning the stand point of the Türmer was German-Protestant as was that of its founding editor, the writer Jeannot Emil von Grotthuß. The Baltic baron regarded Germany as the «Heart of Humanity», perceived however in its culture symptoms of decay to which he wished to draw attention: «petty class and group interests» as materialism in both its imperialist and socialist forms, as well as naturalism, the artistic expression of the socialist materialism.

The Türmer countered these tendencies with a concept of culture which was close to the then developing Heimatkunst movement. Each edition began with several part literary, part essay style texts followed by the columns: «Rundschau» with short reports on science, art and technology, Türmers Tagebuch» on political and cultural questions of the day and the «Feuilleton» with essays and reviews from the areas literature, fine art and music. The journal included sheet music and art prints as inserts.

Grottfuß’s monthly quickly became highly influential and often the subjects he launched were taken up by the daily press. The Türmer’s circulation figures rose from an initial 3,000 in 1898 to 17,500 in 1913 and the journal grew to up to 180 pages an issue. This shows that the views represented by the journal spoke to a wide circle in Wilhelmine Germany.

After 1918 the journal became a bitter opponent of the Weimar party system. Up to his death in 1920, Grottfuß fought against the revisionist «stab-in-the-back legend». His successor Friedrich Lienhard, a regional artist and a native of the Alsace, was sceptical towards Prussia and so he fostered very little nostalgia for the lost Empire. However, unlike the previously by all means congenial Kunstwart, Lienhard’s Türmer advocated a cultural conservatism which in the service of the «reconstruction of Germany» sought connections to the Heimatkunst tradition and positioned itself on a foundation of irrationalism, Blut-und-Boden mysticism, Germanic Christianity and racial biology.

This development went even further under Friedrich Castelle who took over in 1929 and who wasan early member of the NSDAP. During his editorship the Türmer was combined with the Deutsche Monatshefte in its 33 rd year. Castelle also changed to the radical Berlin publisher Beenken and introduced the old German month names on the title pages. Hitler’s seizure of power was not excessively celebrated by the Türmer but was warmly greeted. And already in the issue March/Lenzing 1933 the NS publicist Johann von Leers expounded, under the title «Volcano Poland», on the threat of a Second World War issuing from Poland. By 1939 the Türmer had lost its last scruples towards the NS ideology. In 1943 the journal was absorbed by Westermanns Monatshefte.

The Türmer stands as a measure for, if not as the source of the precarious relationship to tradition which existed in Germany in the early 20th century. It demonstrates how the cultural concept of Heimatkunst from 1914 turned into the conservative revolution after 1918 which in turn flowed into the Blut-und-Boden concept of the National Socialists after 1933.