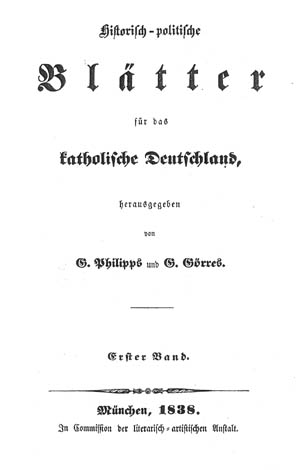 At the beginning of the 19th century a catholic cultural movement came into being, which developed, at first, in a small number of centers. In Munich this center was the circle gathered around Joseph Görres and Franz von Baader. The voice of the Görres Circle was the Historisch-politische Blätter, which were founded in 1838. Its articles covered a wide spectrum in which a clear emphasis lay in the areas of history, culture and politics, especially the relationship between church and state. The founders and original publishers of the journal were
Karl Ernst Jarcke and Georg Phillips. Jarcke, together with Joseph Görres, was the most important contributor who shaped the journal through his contributions mostly titled «Zeitläufte» (Courses of Time) or «Glossen zur Tagesgeschichte» (Comments on the Events of the Day). Georg Philipps and Guido Görres were the editors. Through the always actual and precise positioning of the editors and most important contributors the journal had a defining role in the development of political Catholicism. Founded to lead the attack it quickly became a symbol of the awakening and growing catholic life in Germany.

The phenomenon of an identity strongly formed by the respective editor continued for the whole life of the journal. Under Edmond Jörg, who headed the journal from 1903, the direction was for a greater Germany, feudal and Catholic. Under his successor, Georg Maria Jochner, towards the end of the Empire period there was a noticeable change in the fundamental attitude. He steered the journal in a national-legitimising-monarchical direction. There was a strong political connection to the Bavarian Patriots Party and from 1887 to the Centre Party in Bavaria. After 1918 the journal did not regard itself as adequately represented by any of the political parties, as the Blätter had somewhat of a critical attitude to the newly founded Bavarian Peoples Party, and the Centre Party had already become suspect in 1917 through its coalition with the Liberals and the SPD.

The effect on opinion of the Historisch-politische Blätter might at first seem somewhat extraordinary in view of circulation figures between 1500 and 2000. In reality the journal had considerable more readers than the circulation figures would lead one to believe. It was available in libraries, in priest’s seminaries and in catholic community houses and was also read widely abroad. The readers of the Historisch-politische Blätter formed the Catholic elite of Germany.

The end of the journal in 1923, shortly after the death of Jochner, could be symptomatic for the fact that the basic political ideas, represented by the Historisch-politische Blätter, found less and less support in the Weimar Republic. The deeply conserva-tive section of political Catholicism was, at this time, almost extinguished.