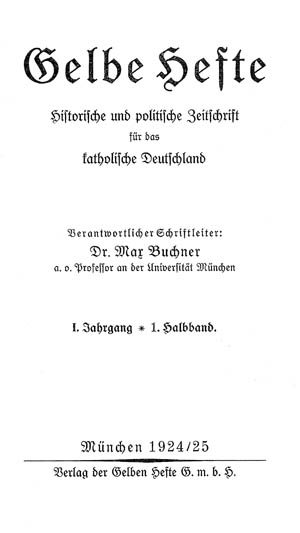 In 1924 the Munich historian Max Buchner launched the Gelbe Hefte. With the title he was quoting the nick name of the, rich in tradition, Historisch-politische Blätter für das katholische Deutschland, which had ceased publication in the previous year. This journal had fought for Joseph von Görres’ political Catholicism for 85 years, but this philosophy had been seriously weakened in the cultural battle during the Empire. Now, in the parliaments of the Weimar Republic, it had been totally marginalised. It was Max Buchner’s aim to fetch it back out of its isolation.

The new journal was thematically oriented on its predecessor: proceeding on the premise of a politics based on historical observation it dealt with cultural, historical and political questions; it also had a section for reviews. Political, however, Buchner approached the spirit of the age with a new alignment. He led Catholicism towards the strengthened right wing nationalism and stood for a monarchism which was oriented on the protestant Prussian Hohenzoller Empire. The Gelbe Hefte should form an interconfessional «unified front» to defend the «German soul» against enlightenment and liberalism. The Gelbe Hefte distanced itself so far from the Centre Party, which represented classical catholic conservatism, that it even regarded the approach to National Socialism as the lesser evil. The total spectrum of catholic opinion towards the NS movement, from rejection to acceptance, was presented in a special issue in 1931. Later Buchner let Hitler’s claim to power pass as a form of God’s mercy, and the Gelbe Hefte, despite isolated criticisms of the regime, also advocated a racial ideological standpoint.

At no time did the Gelbe Hefte reach the circulation, radius of influence and importance of its predecessor. Up till 1926 it appeared monthly, about 100 pages long and in an edition of about 1500, after this rather spasmodically and in decreasing size. The journal died with its creator in 1941. Nevertheless it is a significant document in the history of ideology. New streams in Catholicism during the Weimar Republic and The National Socialist period are indicated by its deviations from the positions of its predecessor. Beyond this it reflects the changes in the right wing nationalist camp with whom the publisher sympathised. His conservative nationalism based on the Empire was increasingly overshadowed by the German folkish tendencies of younger publicists. After 1933 the Gelbe Hefte show a precarious conciliation of some catholic intellectuals towards the NS regime.