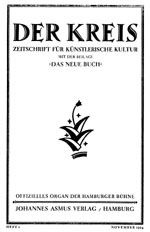 Up until 1926, the monthly magazine went by the additional name «Organ der Hamburger Bühne». However, from the very beginning it was a platform for issues concerning contemporary art, music (incl. Jazz), literature, and architecture. Le Corbusier, H. H. Stuckenschmidt, Hans Henny Jahnn, Ludwig Klages, Max Beckmann, Hans Leip, Joachim Maass, and Rudolf Alexander Schröder are among the contributors. Writers's portraits, culture-philosophical essays and reviews are as much part of the liberal magazine's profile as are pictures of works of art from various epochs. The last issue (1933, No. 5) contains contemplations by Hanns Johst,
Reinhold Schneider, and Friedrich Sieburg. This edition is based on the 102 original single issues which appeared between November 1924 and May 1933. During that time, Ludwig Benninghoff and Wilhelm Postulart were the magazine's publishers.