«… we should place ourselves fully and totally in the current stream of life in the middle of our modern society …»
Carl Muth, A foreword to Hochland 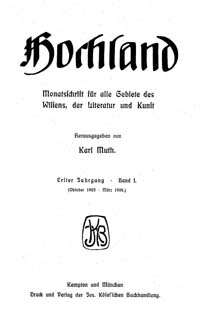 Following the cultural struggles of the 1870s and 80s the German Catholics had been left with a feeling of bitterness concerning that which they perceived as their educational deficit in comparison with the general standard of cultural development. This was reflected in the Catholic press and literature in 1900 where amongst approximately 300 Catholic journalistic publications there was still no up to date critical journal.

Carl Muth intended to fill this deficit with the establishment of Hochland the first issue of which appeared in October 1903. Hochland was not intended to be a popular magazine but rather should provide «free discussion of all current question in art, business and politics» however «only from a free and superior position» which meant without taking the actual political situation into consideration.

During the early years the journal concentrated on literary, religious and philosophical problems but with the beginning of the First World War political problems became more significant. Strongly patriotic contributions were later replaced by a mixture of nationalist and pacifist articles. Between 1916 and 1918 Max Scheler's contributions contained the first demand for a Christian Socialism.

After the war the unification of Europe became a central theme, in the 20s the dispute with Socialism and Marxism set the tone. Carl Muth issued early warnings against National Socialism. The last issue in which such warnings could be openly printed appeared in March 1933, from the end of 1933 each issue of Hochland had to be presented to the censor before publication.

During the reign of the Nazis Hochland did not abandon its critical attitude however the criticism was now more circumspect. Intellectual opposition to National Socialist and totalitarian ideology now set the tone in the journal, the criticism being more and more often presented in the form of historical articles with parallels to the present. Muth also published, after 1933, articles by the Jewish author Elias Hurwicz, under a series of pseudonyms, a somewhat dangerous undertaking. The readers showed their thanks through rapidly increasing interest. In 1933 the Hochland had an edition of 5,000, in 1934 it was already 7,000 then in 1938 10,850 and it even reached 12,000 in 1939.

Carl Muth's Hochland often came into conflict with the censor, for example following a historically framed criticism of the Reichskonkordat in 1933 or after a not very appropriate review of Rosenberg's «Mythus des 20. Jahrhunderts» in 1934. It was often the case later that issues had to be reprinted with the contents changed and the issue for April 1941 was cancelled completely. In June 1941 Hochland ceased publication following an order of the Reichspressekammer. Carl Muth, in whose house the members of the Munich resistance group «Weiße Rose» came and went, was thus deprived of his critical weapon.