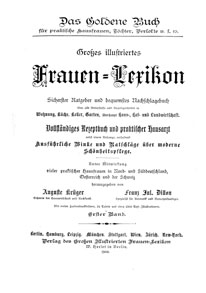 The publishers' aim was it to collect among the hundreds of items which distinguish a well-organized household all those that, from long experience, have proved to be indispensable and instructive to every woman. The result shows that the undertaking turned out to have been far more extensive than thought when it was started. Considered was not only «the household in the usual, narrow sense of the word» but everything that went beyond the kitchen and the cellar. Even though «the furnishing, tidiness, and decoration» make up a central chapter, topics such as hunting, the keeping of domestic animals, the growing of fruit and vegetables or numerous recipes in case of illness were also included. A detailed appendix discussed all principals of beauty care. The extensive articles, which deal with manner, origin, usage, and treatment of the different items, were made accessible through a comprehensive subject index. In addition to that, numerous detailed illustrations make the encyclopedia complete.

The two volumes thus met the female taste of the time: «It will hopefully not be considered as immodest if both writers and publisher adopt the joyful exclamation of a lady quite experienced in these things who, after having first seen the book while still in process, described it as ‹The Golden Book for Women›».

Especially because of the fact that the traditional female role is nowhere being critically examined, the encyclopedia offers a truly extensive and expressive picture of the expectations which were placed on the «perfect housewife» at the turn of the century.