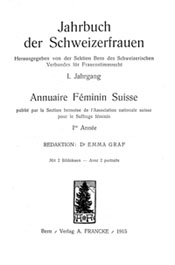 The publishing of both the first and the last issue of the Jahrbuch der Schweizerfrauen (Yearbook for Swiss Women) have one thing in common: both were launched at a time when the public's interest focused on enourmous war events and on new political formations within Europe.

In order to confirm a feeling of belonging together in times like these the Sektion Bern des Schweizerischen Verbandes für Frauenstimmrecht (The Bern Section of the Swiss Association of Women's Suffrage) decided in 1915 to launch a yearly volume on the interests of women.

It was the women's responsibilitiy which had gone through immense changes back then. »If we look at the work Swiss women have done for the public we will notice that, up to now, this work has naturally been divided into two sections: firstly, the activity in the field of charity and the care for the needy, and secondly, the women's work for the women themselves – for the betterment of their civil, legal, and economic rights and for the promotion of women. «World War I brought up yet another responsibility: that of the service for their country, the care for the poor and for people in need. This is the reason why the essays published here focus less on the demands and the desires of women. Rather the authors intended to present in which ways women can make their contribution. Despite financial difficulties – the first volume did not bring the profits expected, and for the second volume the number of pages had to be cut due to the high costs of production – the periodical held out until the turmoils of war during the 1940s.