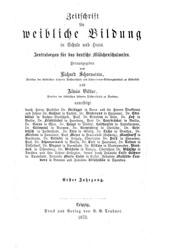 An educationalists' convention in Weimar in 1872 set off the starting of the Zeitschrift für weibliche Bildung in Schule und Haus, established by Richard Schornstein. Coming from a consent to the fact that «the school system for women needs a distinct clarity and structure concerning its internal and external development», the periodical aimed at «gathering the golden grains of truth» from among «a diversity and confusion» that existed due to a variety of often contradictory pamphlets on school reform. The magazine thus meant to encourage an active exchange of ideas.

Its publishers directed the periodical to three different addressees: to the teachers in anticipation of their contribution to the thoughts and demands which were made possible by their own experiences; to the parents out of the conviction «that we need to work together and consciously unite to an active cooperation« and, last but not least, to the youth itself in whom they saw a promising future.