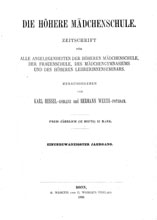 In the first issue's foreword of «Die Mädchenschule», which appeared in 1888, Eduard Ackermann made a complain about the «prejudice in many circles» against the still inexperienced institution of the school for girls and young women which, according to Ackermann, «has long been the Cinderella among her sisters» and which has been «neglected even by educationalists». Furthermore, Ackermann argued that this situation is reason enough to seriously deal with this educational institution and to draw up paedagogical guidelines instead of continuously reproaching the school with its mistakes.

The two editors, Karl Hessel and F. Dörr, thus looked upon their periodical as a platform for «the opinions of all the people involved in the school for young women». Accordingly, the periodical, which changed its name first to Die höhere Mädchenschule and then to Die höheren Mädchenschulen, not only contains theoretical essays on paedagogical and didactical issues. One also finds numerous reports about comparable international institutions and articles on specific classroom experiences. Essays on «Gymnastics at home», «Instructions in the household bookkeeping» or the «Guide to needlework» are as exemplary as essays on «French Poetry», «Botany» or the «History of the Earth».

The attempts to bring generally reformative educational politics in line with a gradually changing notion of women and their role in society are also interesting. There were reflections on the growing conviction that a school's task is not so much to «impart a wealth of knowledge to its pupils, most of which will vanish forever in the course of life, but to rouse and strengthen morals which would hold out against time and would grow against life's opposition».