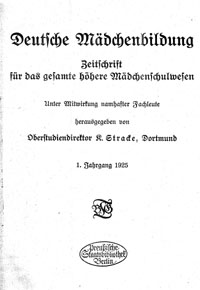 The demise of newspapers in the years after the First World War left a gap which R. Stracke intended to close again with the publication of the Deutsche Mädchenbildung, appearing between 1925 and 1935. The fact that, already, more and more young girls went to schools of higher education not only in order to go on to university but to consolidate their general knowledge was no reason for him to lean back. On the contrary, he saw his duty as educationalist in critically and consultatively accompanying the reform of the school system which had already been started. Strack pursued the aim to have the relatively equal value of male and female education finally be followed by a uniformity of the educational system. «For us the question of importance is if and how the selection and treatment of the subjects taught at schools for girls only should be any different from those taught at schools for boys. Also the question whether co-education should be brought about or tolerated can not yet be regarded as closed.»