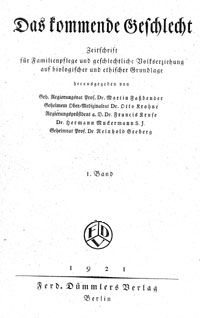 When in 1920/21 the first issue of Das kommende Geschlecht appeared, its publishers explained the necessity of their periodical by pointing at a continuously increasing population and the growing concern about the welfare of the German family. «Corresponding to the changed situations of our time there have also arisen new and important assignments for the population policy. A young generation, healthy with heart and soul, forms the basis of the continued existence of our nation. The harder the needs of the present threaten a stable development of our nation, the keener everybody's interest has to be directed towards our responsibilities for the new generation. Our hope for the future rests on the birth of physically, morally, and mentally sound children to our families.»

The essays, which were mainly written by physicians and university professors, are mostly devoted to topics such as «The Meaning of Marriage», «Women's Progress and the Nation's new Generation», «Heredity and Selection» or «Racial Hygiene». With regard to the politics during the Third Reich and their consequences, these documents, which were published quarterly up until 1934, provide a highly interesting insight into a sensitive topic. Opposing many expectations of our time, they had already been intensively discussed during the 1920s – also in the light of the «Woman Question»