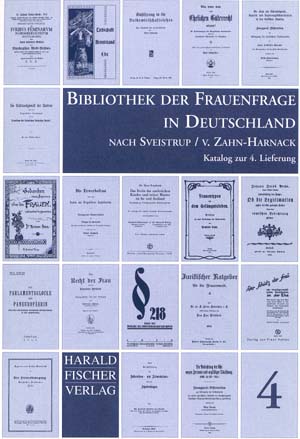 Parts of the Collection are available online.
The titles in the collection are either available directly at our Download platform (Pay per download) or as PDF on demand.
Access to Online Edition

The collection Library of the «Woman Question» in Germany contains 12 installments published from 1998 to 2005. Each installment contains 500 works with a total of about 75,000 pages. Starting in 2007 additional titles to the collection will be provided in supplementary installments. Supplement 2 is now available.

The first women's libraries and archives appeared with the women's movement of the nineteenth century. On the one hand, they were supposed to make available the materials essential for the everyday work of the movement, on the other hand, to preserve the written works of the women's movement for the future. State and university libraries generally did not collect such material – scientifically it was considered worthless. Hardly any of these women's libraries had much staying power: political restrictions like the Prussian Society Law (Preußisches Vereinsgesetz) of 1886, and especially the financial difficulties encountered at the beginning of the twentieth century, caused them sooner or later to surrender. Efforts to preserve the stocks of these women's libraries by giving them to other libraries usually turned out to be unsuccessful. For example, of the more than 4,000 volumes that the society Frauenwohl gave to the Stadtbibliothek Berlin on the dissolution of its own library in 1909, only some 250 survived the evacuation during the Second World War.

In a few libraries, like the Staatsbibliothek Berlin, publications from the general field of the women's movement and the gender problematique were collected at least temporarily. Certainly here, too, the losses inflicted by the war have left large gaps in the inventory, but a large number of the writings have been preserved to the present day.

Thus, aside from one or two libraries which own considerable inventories, the state of primary sources for the historical women's movement appears today to be in an extremely precarious position. Many writings are extant only in individual pieces; the monographs and shorter pieces are still often to be found only in the old stock catalogues kept as card catalogues, and are not evident in the central catalogue. The possibility of using these sources are often extremely limited, due to the sorry condition in which they have been preserved.

The Historical Sources of Women's Liberation Movement and Gender Issues

With the set called Historical Sources of Women's Liberation Movement and Gender Issues, begun in 1991, Harald Fischer Verlag has pursued the goal of making the comprehensive German-language literature of the women's movement and gender issue available for use. The previous editions dedicated themselves above all to the reconstruction and new publication of periodicals. Now, with the Bibliothek der Frauenfrage, much material will be included that this earlier concept could not take into account. Above all, the Bibliothek der Frauenfrage will specifically include writings of the following three kinds:

The Bibliography Die Frauenfrage in Deutschland, by Hans Sveistrup and Agnes von Zahn-Harnack

The bibliography Die Frauenfrage in Deutschland, published by Hans Sveistrup and Agnes von Zahn-Harnack is serving as a working basis for the compilation of the Bibliothek der Frauenfrage. The first scientific task the German Women's Academic Society (Deutscher Akademikerinnenbund, DAB), founded in Berlin in 1926, set for itself was highly ambitious: the preparation of a bibliography of the women's movement and the Woman Question which was to encompass the relevant literature from the late eighteenth century through the first decades of the twentieth. Agnes von Zahn-Harnack, the first chair of the German Women's Academic Society and co-publisher with Hans Sveistrup of the bibliography, writes of the genesis of the work: «The DAB knew that it would not be in a position to carry out this work alone. It was successful, however, in winning over the other German women's organisations – most importantly the union of German women's societies (Bund deutscher Frauenvereine) and the Women's Trade Union – to the work. Moreover, the Prussian state set aside space and made materials available in the Staatsbibliothek for the undertaking, and appointed Dr. Hans Sveistrup, the state librarian, to take charge of the project personally. The ‹Notgemeinschaft der Deutschen Wissenschaft› convinced itself of the scientific significance of the project and supported it materially in liberal fashion. The DAB won over several outstanding women librarians, and by 1933, the manuscript was finished.»

After this successful preliminary work, the bibliography's going to press threatened to founder on the new political circumstances: the concept of the bibliography was not compatible with the national socialist imaginations of science or with its picture of woman. But when in 1934 the first printed exemplar became available in spite of the difficulties, there became accessible for the first time a nearly complete overview of the German literature of the Woman Question and women's movement between 1790 and 1930.

The salience of this work is still unsurpassed today: with some 7,000 titles, the bibliography still delivers the only and thus for research the indispensible record of the German-language literature of the Woman Question and women's movement of nearly 150 years.

The works listed in the Sveistrup/von Zahn-Harnack bibliography will be incorporated to the fullest possible extent in the Bibliothek der Frauenfrage. In light of the rarity and threatening disintegration of many of the sources, it seems appropriate and indeed imperative to go above and beyond what the bibliography has already accomplished. That means, first, that works coming from the time before 1790 will certainly be taken into account, and second, that the content-criteria for the inclusion of a work in the collection will be somewhat relaxed. The consideration of materials that appeared before 1790 makes it possible to make a whole collection of pieces of the learned and edifying literature of the women's and gender issues from the sixteenth, seventeenth, and eighteenth centuries – which are currently extremely rare – once more easily accessible. The criteria for inclusion in the collection stem primarily from the desire to preserve the limited longevity of as many original pieces as possible, and to make these source materials accessible for the many different research approaches which can be applied to the history of the women's movement and the gender problematique.

The Catalogue of the Bibliothek der Frauenfrage

An electronic catalogue, which will be updated with the appearance of each new installment, provides a guide to the contents of the collection. It will be made available free of charge as a databank with read-program. Indices of persons and titles will facilitate the easy tracing of the relevant items, and free text search is also an option. The title data can, if desired, be delivered with the acquisition of the edition in a format which allows easy reading into existing electronic library catalogues (e.g. UNIMARC).