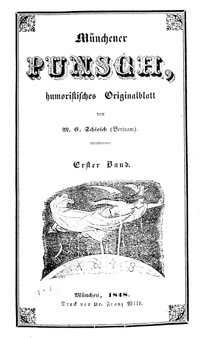 The Münchener Punsch was begun in the revolutionary year of 1848 and published without pause until 1871, the year the second German Empire was founded. It was one of the three longest-appearing illustrated satirical leaflets out of the south of Germany (the two others were the Fliegende Blätter and, much later, Simplicissimus ), specifically, out of Munich, which was politically, in the nineteenth century, more likely to tend to moderation and protectionism. One can read the history of this particular pamphlet in its subtitles. The very beginning is descriptive: like many satire-projects, this one began first of all as a Carnival leaflet, and documented the connections between the «political carinival» and revolution. Before the end of 1848, however, the subtitle had changed to «A satirical original leaflet» which counted as, in that time of disordered and often thoughtless emphasis, a very important advertisement. From 1856 the subtitle was «A humorous weekly». The attempt, in 1875, to bring the paper to new life with the subtitle of «An annotated weekly chronicle of the present day» enjoyed only short success, and ended within the same year.

The Münchener Punsch was delivered as a weekly issue with four, later eight, pages. Its publisher and editor was M.E. Bertram (M.E. Schleich), who, as far as is known today, was also practically a one-man-factory and wrote nearly every issue himself. This is presupposed by the uniformity as well as a certain monotony of the pamphlet, which on the other hand is also an important ground for the favourable evaluation of its commentary.
The themes – Bavarian, German, and even European politics and society – were handled from the southern German perspective. The pamphlet was thus understood during its lifetime by many of its contemporaries as a counterpoint to the spring-tide of caricature leaflets flowing out of northern Germany, especially the Kladderadatsch. The pamphlet may not have been overly agressive, on the contrary, it was often forthrightly contemplative, tame in its texts and more likely to be simple in its illustrations, but it is nonetheless a comprehensive and substantial source for the documentation of a particular position on the German political landscape of the second half of the nineteenth century.