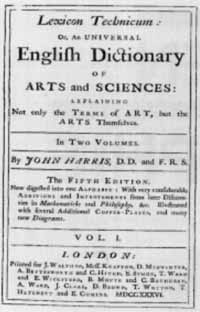 «The lexicon technicum by John Harris holds the distinction of being the first general encyclopedia to emphasize science. Although Harris considered his work a dictionary, it is more than that. As he notes in the subtitle, it is a universal dictionary ‹Explaining not only the Terms of Art, but the Arts themselves›. Influential, it served as a model for Ephraim Chambers' Cyclopaedia and was named by Denis Diderot in his Prospectus of 1750 as a source for the Encyclopédie.

Harris lived during one of the important periods of scientific advancement. An unoriginal thinker himself, he was able to recognize originality in others and to use their works as sources for his Lexicon. Because he relied mostly on the researches of his able contemporairies in the scientific areas and because he consciously sought to describe the ‹modern› advances, Harris succeeded in compiling the first encyclopedia that was, in general, up to date, comprehensive, and detailed on the subject of science.»