The Manuscripts from the Munich University Library 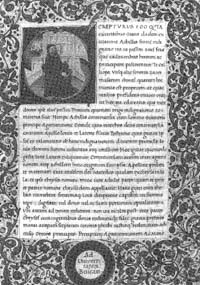 The Munich University Library is in possession of more than 600 medieval manuscripts. Some of them are exceptional treasures such as «Lex Baiuvariorum», the oldest preserved manuscript of the Bavarian public law (dating back to around 800), or a gospel book from the court school of Karl the Great (also around 800).

The History of the Manuscript Collection

The history of the manuscript collection is closely related to the history of the university, which was founded in Ingolstadt in 1472. The manuscripts owned by Ingolstadt were meant to be directly used at school. These codices, which were mostly about Artes literales and religious prose from the artists' faculty of Ingolstadt, make up the basis of this collection. For the most part, they were all donations made by members of the university.

Thanks to the legacy of Augsburg's bishop Johann Egolph of Knöringen (died 1575) it was possible to more than double the holdings. Today, the library owns 56 manuscripts formerly belonging to his possessions. Among them are, for example, manuscripts written by Luther's antagonist, Johannes Eck, and his stepbrother, the ducal-Bavarian chancellor Simon Thaddäus Eck.

When in 1773 Ingolstadt's Jesuit school was dissolved and its library taken over by the university, the medieval manuscript holdings increased by more than 200 pieces - some of them richly decorated.

Threehundred manuscripts were added when, in 1800, the university was moved from Ingolstadt to Landshut and alsowhen several monasteries in Landshut had to be dissolved. The secularization of the possessions owned by Bavarian monasteries (1803) led to yet another increase by 400 volumes.

They mainly consist of 100 eintirely textual manuscripts or manuscripts for commodity, Artes literales and religious prose, books of law (Golden Bull, Upper Bavarian land law, several Swabian codes, city law of Augsburg), calendars, cooking manuscripts, a hunting book, medical and scientific texts. Most codices date back to the second half of the 15th century and originate from Old Bavaria, Franconia, and from the Swabian region. There are also some texts from central parts of Germany as well as from the Netherlands. Worth mentioning is a book by Michael de Leones (around 1350), which presents a rich tradition of Middle high German literature.

The folio works as part of this collection consist of about 230 titles of mainly Southern German origin, more than half of them being of theological content. Many of them once belonged to the University of Vienna. In addition to that there is a remarkable amount of codices of Italian origin as well as some French and Bohemian texts. Noteworthy are the juridical (among them several formularies and lecture notes from Pavia) and both the philosophic and scientific texts. Also worth mentioning are a gospel book (from the court school of Karl the Great), a fragment by Euklid (originating from Northern France, around 800), a comment to the Epistle to the Hebrews by Hrabanus Maurus (France, 9th century), the Annals of Weißenburg (11th century), records of the Council of Konstanz, a corpus of texts from the Albertistenschule in Cologne, an anthology containing more than 200 letters and speeches dating back to the 15th century from near Venice, and autographs by Johannes Eck. A Greek medieval manuscript also included in this collection is a commented gospel book dating back to the 10th century.

The only octavo manuscripts are mostly volumes from the late Middle Ages. The most exclusive among the oldest pieces is «Lex Baiuvaiorum» from the early 9th century. In addition to that there are also fragments dating back to the 11th century including the Waltharius -poem, three manuscripts from the 12th century showing Eastern French handwriting as well as two illuminated pocket bibles from Northern France or northwestern Italy dating back to the 13th century.

Regarding the 15th century, also worth mentioning are: the illuminated Flemish Stundenbuch (book of hours) as well as a prayer-book, a text by Boccaccio from Florence, and a Tribull-Properz-Ovid manuscript. Two thirds of the octave manuscripts belonged to the Franciscan Order in Landshut. They are mostly of theological content, several being the orders' books of rule.

In addition to the manuscripts already mentioned there also exist 140 in quarto format. They cover all medieval fields of knowledge: astronomic, scientific, grammatical (incl. Hebrew) and rhetoric, theologic and philosophic, juridical, and historical texts as well as classical authors. Some of the noteworthy books are works by Rufinus, Sulpicius Severus, and Augustinus (8th/9th century), works by Cicero (10th/11th century), the Würzburg Psaltarium (around 1200), letters from Conrad Celtis, the Ingolstadt Library catalogue from 1508 as well as a few more manuscripts once belonging to Johannes Eck, especially an autograph dating back to 1510 and containing geographic and cosmographic notes going back to the times Eck spent in Feiburg.

The microfiche edition contains the total stock of music manuscripts from Munich University Library: 42 medieval and 26 modern pieces. Several vocal books and an anthology from the 13th century belonging to the humanist and music theorist Heinrich Glaeren are especially noteworthy. Also significant is a series of Stimmbücher (hymn books) from Southern German Tegernsee and Ebersberg, the order of the Prämonstratenser in Schäftlarn, and the Augustinian convent Moosburg (Moosburger Graduale, around 1355).

In literary studies, the music manuscripts of the Munich University Library have so far found varying attention. The interest has mainly been focused on already known single texts of the collection, such as the Moosburger Graduale, while other rarities are still hardly known. The German Antiphonarium, The Bauerberger Vollbrevier, the organ books of Bernhard Rem, and the motet collection of Senftl for instance have only sporadically been of interest for scientific research and are still waiting to be discovered by specialists.