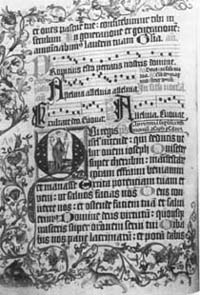 Augsburg as a City of Music

The two pillars of cultural life in medieval Augsburg were the cathedral with its adjacent school first mentioned in a document in 812 AD and the benedictine chapter of St. Ulrich and Afra. These two spiritual centers, however, had to compete with a city enjoying flourishing strength, particularly after its elevation to a Reichsstadt, or free city of the Roman Empire, in 1276.

The 15th century was a time of rich musical development for the rising merchant city. Among the many examples of Augsburg's musical development were the privilege of being the first free city of Rome to have a corps of Trumpeters, the flourishing construction of organs, the first authenticated Meistersinger school and the institute of the Augsburg Stadtpfeifer. In particular, civic development of music owed its high level to the Fugger family, which drew numerous renowned musicians to Augsburg. In addition, in the 18th century the organ and piano-maker Stein made Augsburg the most important city in piano-making of its time. (Music printers and publishers had already settled there prior to this.) Secularization and the end of the Reichsstadt era in 1806 were painful blows for music in Augsburg. However, a new boost came in the person of Hans Michael Schletterer, a student of Spohr, who was appointed cantor of St. Anna and eventually director of sacred music at Augsburg.

The public library of Augsburg was established in 1537. In the course of the Reformation, many monasteries were abandoned. Thus, parts of the Carmelite, Dominican and Franciscan Orders' book collections became the foundations of the new library's collection. The librarian in charge was the rector of the gymnasium of St. Anna, founded in 1531.

In its first year, the library established an annual budget of 50 florins to procure new books. In 1545, the library was able to acquire 100 Greek manuscripts from Venice, which from then on made the library famous. The library also bought the contents of two theology libraries containing works on the Reformation. Under the scholarly directors Hieronymus Wolf and Georg Henisch, the library became a research center of both respect and quality. After the Bibliotheca Palatina was moved from Heidelberg to Rome, the library became the most important Protestant library in Germany.

Until 1618, considerable expenditures were made to extend the library. Moreover, the Augsburg historian Marcus Welser, who died in 1614, bequeathed his book collection of 2,266 works to the library. During the 30 Years War, however, the intensive support of the library decreased noticeably. Only slowly did it regain its early reputation, as well as financial and organizational support. Of major importance was a city council decree requesting all Augsburg printers and publishers to donate one copy of every book they published to the library.

A serious break in the library's development came with secularization. After the Reichsstadt of Augsburg lost its independence in 1806 and became part of the state of Bavaria, the library had to surrender precious manuscripts (such as the previously-mentioned Greek manuscripts), incunabula, and early prints to the court library in Munich. However, during that time the library did make tremendous progress in the acquisition of secular literature.

After 1806, the library began receiving books from several church libraries: almost 10,000 from the Benedictine Abbeys of St. Ulrich and Afra - among them numerous music works - and also works from the Augustine chapters St. George of the Holy Cross, the Dominican Monastery, the Monastery of the Franciscan Observants, the Capuchins and the collegiate chapters St. Moritz, all of which were located in Augsburg. At the same time, approximately 10,000 books from the Jesuit college St. Salvador were also incorporated in the library. During the years of 1817-1835, further additions from the court libraries of Rebdorf, Irsee, Roggenburg, Ottobeuren, Ursberg, Kempten and Mindelheim were made by the library. At that point, the library included more than 100,000 books.

The manuscripts created in the late 15th century reflect the ideas brought about by the introduction of the Reform of Melk, which made the revision of liturgical texts and chants necessary. St. Ulrich and Afra ran their own scriptorium, whose renowned members included the calligrapher Leonard Wagner. The heyday for musical works in St. Ulrich and Afra came during the second half of the 16th century. Although prints eventually began to supersede manuscripts during that era, they did not lose significance as a musical source. In the case of the St. Ulrich Choir Books, the manuscripts are still the primary source.

Some of the Highlights of the Collection

The musical manuscripts of the Staats- und Stadtbibliothek from the 19th and 20th centuries mainly consist of works of local composers. The library owns, for example, manuscripts of compositions by the Augsburg Cathedral Director of Music, Franz Gregor Bühler (4° Cod. mus. 12, 13, 14, 15 and 23), whose Masses and oratorios became very popular in Southern Germany and Austria in the 19th century. Some mandora and lute tabulators show some of the common music of the 18th century (Tonk. Schl. 290 and Tonk. Schl. 509), whereas one popular manuscript with lute music (Tonk. Fasc. III) comprises chamber music which had been played at the Court of Bayreuth. Although one cannot dispute that these titles are of some importance as evidence of the music of the time, the most valuable pieces in the collection will be found between the 14th and 17th centuries.

Here one must point out a psaltery (2° Cod.49a) written by Leonard Wagner in 1495 and richly illuminated in the studio of Georg Beck, and an illuminated gradual also written by Wagner in approximately 1500 (2° Cod. 248). In particular, splendidly rendered is a manuscript by Andreas Maierhofer from 1568 with Magnificat- Compositions by the Dutch Orlando di Lasso (Tonk. Schl. 13) which triggered an intense study of Lasso in St. Ulrich and Afra. There are also compositions by Lasso students from Munich among the Augsburg handwritings. Leonard Lechner (Tonk. Schl. 20), Jakob Reiner (Tonk. Schl. 4), and Johann Eccard (Tonk. Schl. 6) should be mentioned among these. Of special interest in terms of music history is the manuscript 2° Cod. 142a from 1505-1514. It is a fine example of common music in Augsburg, including songs, chansons and motets. Among the composers it includes are Fuldra, Finck, Josquin, Senfl, and Alexander Agricola.

From the collection of the Reichsstadt are two manuscripts containing Renaissance motets by predominantly Dutch composers, which were written in 1570/71 and 1595 (Tonk. Schl. 273-278 and Tonk. Schl. 298-301). Also of historical importance is a 1616 score - manuscripts with canzones and motets by Asprilio Pacelli, Giovanni and Andrea Gabrieli (Tonk. Schl. 39). A cross-section of Augsburg's Catholic music prior to the 30 Years War is exemplified by a choir book from 1610 by St. Ulrich and Afra's first writer Johannes Dreher (Tonk. Schl. 4). Not only can figures of international significance, such as Clemens non papa, Hollander, Lasso and Palestrina, be found here, but also the representatives of the Augsburg music world, such as Aichinger, Erbach and Klingenstein.

Of particular interest for music historians are fragments of a manuscript from around 1500, including free renderings of French-Burgundy Chansons and motets by composers of the Ockeghem-Generation, which was found bound in scrap paper in Mindelheim in 1610 (4° Cod. mus. 25). As a concluding example of superb pieces from the collection, one should mention the Sequentiar 8° Cod. 61 from 1561-1562. It is quite exceptional because it contains 100 sequences, of which 96 were excluded by the council of Trident. It was mainly preserved for purposes of posterity.

The manuscripts from the Staats- und Stadtbibliothek Augsburg are still of exceptional significance for scholars of music science and music history, both as evidence of music development in Augsburg before 1630 and, in the case of the later works, for their significance as single compositions. Music theorists and practitioners will always be interested in using them in scholarly research or as evidence in scientific analyses, and in reviving them through performances or new publications. This microform publication will dramatically enhance the accessibility of these splendid manuscripts for all users.