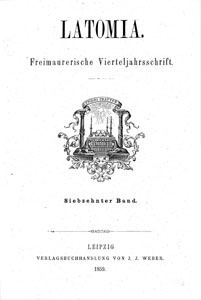 «May our work rest on wisdom, may it be glorified through beauty, and may it powerfully and charitably influence the entirety.» Under this motto the first issue of Latomia, which was published by J.J. Weber in Leipzig beginning in 1873, was launched in 1842. Contrary to the Freimaurer-Zeitung and the Bauhütte, this periodical was meant not only for lodge brothers but was also directed at interested people from the general public.
It was the paper's concern to permanently consolidate Freemasonry's essence in its foundations. By promoting its members' abilities and skills, it wanted to support them in becoming well-educated workmen. »Only in broad day light will an artist be able to instruct his apprentice, only by the stimulus of personal reflection the true nature of art will unfold itself to him, and only thus will he rise above the mere imitator of received forms.« According to the periodical's editors, an apprentice should not stagnate at the level of knowledge at the time of his admission to the Freemasons. Just as «world's history has always been the greatest teacher to all generations» the newcomers should also be thoroughly instructed not only in the history of Freemasonry but in the union's opponents as well. Critical thoughts about Freemasonry therefore also found entrance to the periodical.
In addition to specific topics such as «On the relationship between philosophy and Christianity in our time» or «Is Freemasonry an obsolete institution?», the periodical also published essays on the history of Freemasonry in the different countries, poetical contributions, chronicles, reviews, and statistics. Illustrations mainly showed lodge buildings, coats of arms, and badges. Finally, a «Intelligenz- und Anzeigenblatt», which appeared during the first years only, provided the opportunity to correspond with the editorial staff, to criticise, and to advertise new publications of national and international literature.