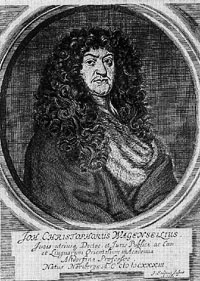 «Catalogue of the Wagenseil Collection» on CD-ROM (with pictures of title pages) is available from the publisher.

The Collection and Erlangen University Library

In the 250 years since its foundation, Erlangen University Library has acquired a number of interesting and valuable public and private collections of books. The most considerable addition to the library's stock of books occurred, however, when The University of Altdorf was closed down in 1809 and its stock transferred to Erlangen in 1818. The Altdorf legacy also includes a remarkable collection of Hebraic writings and oriental literature in general. The majority of these Hebraic writings originally belonged to the Altdorf polyhistorian, jurist and orientalist, Johann Christoph Wagenseil.

Wagenseil was born in Nuremberg in 1633 and died in Altdorf in 1705. After completing his studies, he travelled the countries of Europe and the Near East for more than ten years as a private tutor and tutor to princes, about which he also wrote a book:

During his travels Wagenseil was already able to lay the foundation for his library. For in 1666 when, under the influence of the pseudo-messiah Sabbethai Zvi, many Jews sold their possessions, he succeeded in acquiring a number of extremely rare Hebraic works in Amsterdam. From 1667 onwards Wagenseil was professor of history and public law, from 1674 of oriental studies and from 1697 of canon law at The University of Altdorf. Wagenseil himself was the writer and editor of several important works on Jewish culture. Amongst other things he had rare Jewish writings reprinted, as with the «Tela Ignea Satanae» (Satan's Burning Arrow), Altdorf 1681 (VK 112; 113). In addition to a Jewish-German abridged grammar, he published a small chrestomathy of Yiddish writings under the title «Belehrung der Jüdisch-Teutschen Red- und Schreibart» (Information on Jewish-German idiom and style), in Königsberg in 1699.

Shortly after Wagenseil's death in 1705, his heirs began their endeavours to sell the collection of books. However it was not until 1780 that the transaction was finally concluded: the University of Altdorf purchased the collection of approximately 600 titles, bound in 300 volumes, for the price of 450 gulden. This price was so considerable that the University had to pay instalments to Wagenseil's heirs until 1713. The approximately 300 volumes are divided, as we know today, roughly as follows: 150 volumes of Hebraic writings, i.e. writings by Jews for Jews in the Hebrew language, 55 volumes of Hebrew writings by Christian Hebraists and 95 volumes of philological literature from Abyssinian and Arabic through Greek and Japanese to Persian and Syrian. The main emphasis of the contents is on bibles (monolingual, bilingual and multilingual parallel editions), editions of the Talmud, descriptions of life and customs, historical literature, grammars and dictionaries, as well as rarities of Jewish-German literature. Among the oldest copies in the Wagenseil Collection are Elia Levita, «Capitula Cantici ...», Basle 1527, and Moses Maimonides, «Logica Sapientis», Basle 1527 (VK 248). The oldest Arabic copy of Avicenna's «Canon», Rome 1592, various works by the Leiden orientalist Thomas Erpenius (1584-1624) as well as some Syrian copies from Paris (early 17th century) are also worth mentioning.

On purchasing the Wagenseil book collection, the University of Altdorf had a list drawn up of this stock of books. After the Altdorf library was closed down, this «Catalogus Libb. Rabb. hebr. et Philolog. B.Wagenseilii» (sales catalogue) was considered lost without trace. Without this catalogue and for lack of sufficient linguistic proficiency, the Wagenseil collection was gradually forgotten. Moreover, the collection had not been displayed separately, but - with the exception of the Rabbinica - the volumes had already been allocated to other subjects as early as 1749 and had not been catalogued sufficiently. This is why today the majority of Wagenseil's books come under the subjects «Or.», «Rab.» and «Thl.» of the original general stock. Individual volumes can be found scattered about under the shelf-marks «Altd.», «Ggr.», «Hist.», «Jur.», «Med.», «Mth.» and «Nspr.».

The Reconstruction of the Collection

1981 was a year of destiny for the Wagenseil Collection - the sales catalogue, which was considered lost without trace, was rediscovered in a bundle of files from the University of Altdorf. Now it was possible to reconstruct the Wagenseil Collection. For several years Hermann Süß has been working intensively on this task. He has succeeded in bibliographically registering anew all of the titles named in the sales catalogue and in identifying almost all of the Wagenseil books that were scattered about.

The microfiche edition of the Wagenseil Collection is edited and scientifically managed by Hartmut Bobzin, professor of Islamic science and Semitic philology at the University of Erlangen, and Hermann Süß, who is largely to thank for the reconstruction of the collection. The edition contains all of the still traceable works in the collection. Only about ten of the titles can not be found, in a very few cases copies were filmed which are not of Wagenseil provenance, as the Wagenseil copy listed in the sales catalogue was given away as a duplicate.