edited by the Rostock University Library and prepared by Hermann Süß and Heike Tröger
397 titles with ca. 48,000 pages
incl. MARC-Records 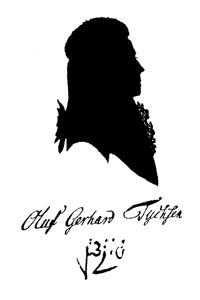 In 1817, Rostock University acquired the private library, including the manuscript legacy, of Oluf Gerhard Tychsen (1734-1815). In 1760, Tychsen began working at the then newly-established Bützow University in Mecklenburg, and in 1763 he was offered a chair of oriental languages. In addition to that, he also worked as a librarian. After the reunion of the universities of Rostock and Bützow in 1789, he moved to Rostock.

At the time of his death, Tychsen's private library consisted of about 10,000 volumes. His excellent bibliographical skills and his passion for collections resulted in a treasury of books that was anything but average. Apart from the sale of a few surplus copies during the 19th century, the collection remains nearly complete and forms the heart of the university's Hebraica and Judaica inventory. It is being supplemented by books from other ducal Mecklenburg libraries as well as several acquisitions made by the university itself. These items make the Rostock Hebraica and Judaica one of the most remarkable collections on the European Continent.

Hermann Süß and Heike Tröger have been working on the reconstruction of this collection since 1995. Their work is being supported by the Deutsche Forschungsgemeinschaft.

The nearly 400 titles of this edition offer a cross-section of the history of Yiddish books up to the 19th century. There are numerous rarities and unica, including the first Yiddish printing, Mirkevet ha-Mishne, Krakau 1534. Among translations and paraphrases of the Bible the collection contains the Konstanz-edition (1544) as well as translations by Blitz and Witzenhausen. Three of the existing editions of the Tsene-rene (Frankfurt a.M. 1685, Sulzbach 1702) were first discovered in Rostock, and the third of those (Fürth [Pseudo-Amsterdam] 1761) is apparently to be found nowhere else. One of the rarities among the prayer-books is a Hebrew Siddur. It contains Yiddish passages and was published in 1560 in Mantua. The collection chronologically focuses on the 18th century. Therefore, it can be seen as an extension of the 17th century book collection by Johann Chr. Wagenseil (1633-1707), who lived exactly 100 years earlier than Tychsen.

At the center of Yiddish philology are books reflecting the analysis of Judaism made by Christian scholars. Already in the 16th century, the Taitsch for Jews, which contained Hebrew letters, attracted their attention. Scholars such as Elias Schade and Thomas Blebel, Jr., who both lived at the turn of the 16th century, often combined Hebrew grammar with introductions to Jüdisch-Deutsch in their works.

In many aspects, Tychsen's legacy shows a missionary tendency that was characterized by Pietism. Printings of treatises or of the Bible, published by Callenberg's Institutum Judaicum (1728-92), are an important part of the collection. It consists of more than 30 titles and thus comprises over two thirds of the Yiddish missionary treatises, several of them existing in various editions and, according to the addressee, with either the title and preface in Latin, or completely in Jüdisch-Deutsch, or German written in the Hebrew alphabet.

A collection of more than 80 copies of 69 different Jewish pocket diaries is also noteworthy. They were all produced between 1712 and 1814 in such diverse locations as Altona, Amsterdam, Berlin, Frankfurt (Oder), Fürth, Hamburg, Jessnitz, and Sulzbach. Pocket diaries were considered articles of daily use and were thus generally not collected by libraries. However, they offer interesting information on folklore and folk medicine, and there is a visible analogy to Christian calendars.

A dozen broadsheets form an additionally remarkable part of the collection. Three of them date from the 17th and the 18th century, the others were printed during the revolution of 1848 and make use of the Yiddish language as a means of political satire.