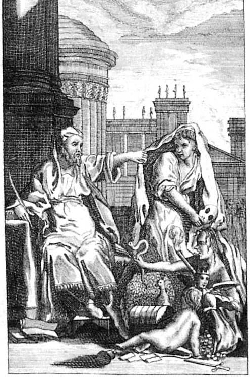 «The 18th Century was a great theatre era in Germany.» (Hans Knudsen)

The University Library in Munich preserves, for the second half of this century, an extensive and valuable collection: ca. 1800 German language stage plays in 466 octave volumes. As the simple typographical ex libris reveals this is the private library of »Baron de Pfetten«; by which is probably meant Johann Ignaz von Pfetten (1717-1803), Chamberlain to the Bavarian Elector. The collection of dramas had already become part of the University Library at the beginning of the 19th century (during the Landshut period (1800-1826) of the Ludwig-Maximilian-University before it moved to Munich) and was there shelved in one piece until the present day.

After a few separate titles from 1735, 1745 and 1748 the collection, beginning with the publication year 1750 and then continuously up to 1802, has for each year on average 25 to 30 and later 35 to 40 theatre texts. Baron Pfetten has noted the literary genre to which each piece belongs inside the cover of the volumes. Conforming to the stage repertoire of the period comedies (Lustspiele) are dominant, constituting at least 40 percent of the collection; «Comedies and other entertaining books» (as it is put in his hand written catalogue for 1784) are also obviously the enthusiasm of the collector. Next in order are dramas (Schauspiele) with 25 percent and tragedies (Trauerspiele) with 20 percent. Operas, musicals and operettas (Opern, Singspiele und Operetten) are less present, with a total of only 130, but with an increasing tendency during the half-century. A few family and moral tableaux (Familien- und Sittengemälde), chivalry (Ritterspiele) and pastoral (Schäferspiele) plays, carnival pieces (Faschingsstücke), farces (Possen), and ballets (Ballette) as well as 25 plays for children or young people and dramas for young boys or youngsters complete the spectrum. On several of the pieces the collector has also added by hand the purchase price.

The texts are mainly in German, but several bilingual editions are included. The authors and adaptors are also largely German. The celebrated works of the greats; Klopstock, Lessing, Goethe and Schiller are present but here, as in the stage repertoire of the time, they only play a marginal role. The successful and prolific authors of the period are of course well represented in the collection, amongst others Johann Christian Brandes, Christoph Friedrich Bretzner, Friedrich Gustav Hagemann, Karl Friedrich Hensler, A. W. Iffland, Johann Friedrich Jünger, Johann Christoph Kaffka, A. v. Kotzebue, F. L. Schröder, Julius Graf von Soden, Christian Heinrich Spieß, G. Stephanie d. J., C. A. Vulpius and Friedrich Wilhelm Ziegler.

Pfetten's collection obtains a special value from the modern viewpoint through the fact that it contains hundreds of other authors and translators who are represented with numerous texts, although they are in the meantime scarcely known or even completely unknown, for example Andres Joseph von Guttenburg, Johann Georg Heubel, the Chamberlain to the Palatine Elector J. G. von Nesselrode, the Post Office Director from Lindau Andreas K. G. Raufer, the senior civil servant (Regierungsrat) from Burghausen Joseph Valentin Speckner, or the school director of Celle Johann Heinrich Steffens. This also includes people who have remained well known in other areas such as the book censor and esoteric (Esoteriker) Karl von Eckartshausen or the inventor of lithography Alois Senefelder with his two comedies Die Mädchenkenner und Mathilde von Altenstein oder die Bärenhöhle. As well as from the famous Luise Adelgrunde Victorie Gottsched there are plays from the female playwrights: Susanne Bandemer, Elise Bürger, Catherina von Hesse, Elise Müller, Maria Anna Antonia Sternheim and Marianne Sophie Weihard. However a considerable number of the texts appeared anonymously as was usual in this period and genre.

Although in German the library, reflecting the spirit of the times, also contains the cream of the theatre of the neighbouring countries however with distinctly decreasing tendency: So there are at least 210 texts which are translated from the original French, freely translated, borrowed, freely adapted, imitated etc. as is indicated on the title pages and in the forewords. As well as Molière with his comedies Beaumarchais, Corneille, Diderot, Legrand, Marmontel, Mercier, Racine and Voltaire are frequently represented. At least 90 texts are based on Italian originals: Next to Goldoni with all of his comedies, dominant is Pietro Metastasio. Carlo Gozzi, Scipione Maffei, and G. B. Fagiuoli also deserve mention. Just as numerous are the translations from English: Shakespeare of course und from contemporary authors above all Henry Fielding. The comedies of Ludwig von Holberg translated from the Danish are also present. Finally there are a few scattered adaptations from Latin (Platus), Spanish (Calderon) and Russian (including Der Familienzwist from Czarina Katharina II).

Baron Pfetten's collection has a regional concentration on the German-speaking south. The theatre works were most frequently printed and also preformed in Vienna and Munich. Well represented, but not as frequently, are both of the book fair towns Leipzig and Frankfurt as well as - and not only by the Deutsche Schaubühne - Augsburg; after that follow Mannheim, Berlin, Cologne, Hamburg, and Breslau. Of great value for the history of the theatre are the hundreds of performance notes, some of which are dated: «written for the», «for the use of» or «performed at the Elector's Theatre» or other stages in Munich, the theatre in Vienna («can be found by the lodge master»), in Augsburg, Amberg, Cologne, Mannheim, Mainz, Regensburg, or Sondershausen. Sometimes the public interest is also stimulated by hints of censorship in other places: «Not performed in the Kaiserlich Könglichen Nationaltheater» in Vienna or «as it was not performed at the Prague National Theatre».

The second half of the 18th century and the years around 1800 is an especially important and productive epoch in German literary and theatre history. The Library of Baron Pfetten mirrors not only its owner personal passion for theatre but is at the same time a rich source for the drama of the Enlightenment. As one of the largest collections of its type and time in Germany it contains numerous rare titles some of which are not even available in other libraries. Its inclusion in the electronic record has therefore led to an increasing actual use, to a growing number of inter library loan orders and above all to the wish to make photocopies. This has led the Munich University Library, also motivated by conservation considerations, to suggest that the Harald Fischer Verlag should produce a Microfiche Edition of this extensive and important theatre library, thereby making the entire collection available to other libraries and then more accessible for international research. The microfiche edition features rare works about cultural history because they present valuable insights for every researcher. This is especially true for scholars focusing on historical and ethnical matters. By doing this, this edition offers numerous printings worth being conserved and makes them available to the public. They focus on customs and traditions, on magic, cabalism on one hand and on biographies, funeral sermons (including biographical appendixes) and and genealogical literature.