The Medieval Manuscripts from the
Anhalt Regional Library Dessau 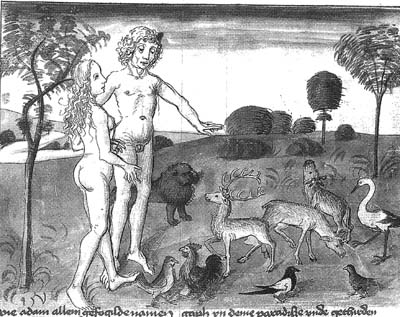 On the History of the Anhalt Regional Library Dessau

The Anhalt Regional Library can look back at an eventful history: opened back in February 1922 as Anhaltische Landesbücherei, its holdings based on the Ducal Administrative Library founded between 1876 and 1878. During the 1920's, several additional collections found their way into the Anhalt Regional Library, part of which were the Ducal Court Library and Georg's Library.

During World War II the library was struck hard by a major damage: about 90 percent of its holdings were lost. Thanks to intensive exchange deals after 1945 - for example with the Berlin, the Gotha, and the Halle libraries - the library's inventory increased again. In 1959, the library was integrated to the Halle University and Regional Library. A few years later it was united with the Dessau City Library and eventually, in 1991, the library received its original name: Anhaltische Landesbücherei. Today, its collection numbers 111,000 volumes, 10,000 of which are old holdings.

About the Old Holdings

It unites several collections from Bernburg and Dessau; the most important one being the Bernburg Library of the Princes Christian I (1568-1630) and Christian II (1599-1656). This collection reached its peak back in the early 18th century: in 1715 it numbered 2,335 titles.

Also integrated into the Herzogliche Behördenbilbiothek were: the Arnstadt and Sonderhausen Library, the library of the convent Gerode, the library of the Fürstlich Anhaltische Deutsche Gesellschaft (Anhalt's Princely German Association), the collections from the Mining Department Harzgerode, the Medicinal Libraries Bernburg, and the Anhalt Collection owned by the pastor and historian Theodor Elze (1823-1900).

A number of institutions, such as the Office for Statistics, the Office for Agriculture, and the Princely Amalienstiftung, also donated their holdings to the Anhalt Regional Library.

Opened in 1820 as a public library, it housed the libraries of various castles in Dessau and its surrounding areas. The oldest collection is the one established by Johann Georg I (1567-1618), which was later continued by his daughter, Eva Katharina (1613-1679). Also worth mentioning is the library of Prince Friedrich Franz von Wörlitz. In addition to that, the following libraries were also included: the library of the architect Friedrich Wilhelm von Erdmannsdorff (1736-1800), the collections of both the elementary school and the Philanthropinum, as well as several other private collections such as one formerly owned by the Russian librarian von Schardius or the astronomer Schwabe. In 1898, the collection of the Prussian diplomat Hermann von Thiele (1812-1889), which focused on history and literature, also found its way into the Anhalt Regional Library.

Georg III (1507-1553) was dean of the cathedral in Magdeburg and later evangelic bishop in Merseburg. Among his friends were Martin Luther and Melanchthon. Georg's mother, Margarete von Münsterberg (1473-1530), and other members of the family helped increasing his library. In 1926, the state of Anhalt decided to buy the collection for the Anhalt Regional Library.

Today, Georg's Library contains about 500 volumes (1,800 titles). Some of them are richly illustrated manuscripts, incunabula, and early printings. It also records writings by Reformers such as Luther, Melanchthon, Zwingli, Calvin, and Hutten, as well as by anti-Reformers such as Johannes Eck and Cochläus. In addition to that, there are also classical writers, works by Humanists (for example Erasmus) and many more. Beginning in 1528, Georg even started collecting Hebrew writings.

A few highlights of the collection

Among today's manuscript holdings from the Anhalt Regional Library, the Georg's Library is the largest. The most valuable manuscripts mainly belong to this library. Worth mentioning is the richly illustrated «Köthener Historienbibel» (Köthen History Bible; Georg Hs. 44.8o) dating back to the 15th century. This manuscript is probably of Thuringian origin and was made in the old style with more than 500 illustrations, even though back then the printing technology had already established itself.

Also from the same century are theologic manuscripts, «Freidanks Bescheidenheit» (Georg Hs. 24.8o), and «Johannes Tauler» (Georg Hs. 44.8o), the latter being a collection of texts about German mysticism, among which «Der Frankforter = Theologia deutsch» and the «Traktat von der Abgeschiedenheit» (probably written by Master Ekhart) can be found. Necessary to mention are the manuscripts «Von den 24 Alten» by Otto von Passau (Franciscan order), which date back to 1446 (Georg Hs 230.8o) and which are richly decorated with initials. In addition to that, the «Statuten des Deutschen Ordens» from 1442 (Georg Hs. 243.8o) as well as four «Sachsenspiegel» from the 14th/15th century (Georg Hs. 266 - Georg Hs. 269o) can be found. Also the manuscript «Stricker. Ulrich von Etzenbach. König von Laurin. Rosengarten von Worms» (Georg Hs. 224.8o) from the 15th century counts as one of the exceptional possessions.

Among the four medieval manuscripts originating from the Herzogliche Behördenbibliothek, the «Schlüssel zum Sächsischen Landrecht. Einzelne Artikel des Magdeburger Weichbildrechts», which go back to the 15th century (BB Hs. 22841 W (H)), also need to be mentioned.