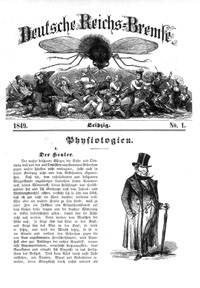 In terms of publications-history, it constitutes anything but an easy case: the political-literary magazine Der Leuchtthurm, which appeared from 1846 to 1851 and ended up finally with the name of Die Wartburg, inspired a following of satirical inserts which, in this rather short period of time and under the unfriendly influence of the supervisory authorities, were forced to change title no less than six times. All these variants are collected into a unified whole in the present Mikrofiche edition.

In the beginning, there was Die Laterne, eine Monatsschrift zur Unterhaltung und Belehrung («a monthly paper for entertainment and instruction»), which consisted overwhelmingly of text and had only a few illustrations. From 1846 to 1848, this piece appeared monthly – i.e., relatively infrequently – as an eight-page insert of the Leuchtturm. In 1848, after only the third issue (in March), the insert ceased publication. It is worth noting, however, that the insert's editior was Ernst Keil, a very politically active man, who was to become well-known with the founding of another magazine: the Gartenlaube, the most successful publication of its time.

In 1849 and 1850, he followed Die Laterne with the sharpest and most explosive members of this series, the Brake of the German Empire. This was, as much as in its caricatures and in its glosses, a brilliantly analytical, malignant, and pointed leaflet, which appeared now on account of current events as a weekly four-paged insert to the Leuchtturm. For perhaps obvious reasons, the pamphlet failed to mention the name of its editor. There are namely two different publications to be found for which the publishing house of E. Keil & Co. were responsible, and these have different orders for the numbers of the issues as well as a whole sheaf of special editions which had been qualified by a censor. A few of these have the subtitle of «Insert to the Leuchtturm» serving as their main title, others actually went back to the original title of Die Laterne. «We find ourselves obliged to provide our Prussian readers with Die Laterne as an insert, seeing as the Reichsbremse has been prohibited within the possessions of the Hohenzollerns». Others still were delivered with no title at all, only an issue number in the headline – a true curiosity in publications history! Clearly the collected volumes suffered the same scrutiny: the issues of 1849 were offered together as an Organ für politisch-satyrische Sticheleien («Mouthpiece for political-satirical Gibes»). It hardly needs mentioning that the one as well as the other – individual issues as well as the collected volumes – made the police and the censors perk up their ears and reach for their own peculiar tools of the trade, which of course led eventually and inevitably to the supression of the leaflets.

Not surprisingly, alternative publications appeared. First the Spitzkugeln in 1850 and then, with uninterrupted issue-numbering, Die Wespe, in 1851. This latter gave itself at some pint the subtitle of «insert to the Wartburg », which its successor Die Schildwacht also adopted. With this last, in the political landscape of resignation that followed the events of March 1848, the series had to give in and halt the presses. Seen from today's standpoint, the series remains a comprehensive and informative document of satirical and critical contemporary witness.