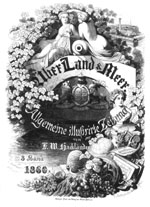 Über Land und Meer belongs to one of the most successful types of magazines in the 19th and 20th century that was devoted to a continuously expanding supply of reading material covering all fields of curiosity and knowledge and that was characterized by a steady use of pictures and picture-text-combinations. It was modelled on
Die Illustrirte Zeitung and did not try to hide this fact, as the clearly imitated subtitle «Allgemeine Illustrirte Zeitung» proves.

The production of the both amusing and instructive, both informative and critical paper particularly for a «middle-class» readership soon developed its own profile and obtained a considerable share of the market which, in turn, had registered a rapidly increasing demand for popular magazines in the second half of the 19th century. Started in 1859, the magazine distinguished itself by determined endurance and a flexible adaptability and thus managed to survive all political and social changes until after the First World War when, due to inflation, it came to an end in 1923. Its two founders remain remarkable: the successful author Friedrich Wilhelm Hackländer functioned as the publisher and the experienced and efficient Eduard Hallberger as the producer.

The first issue´s announcement («Prospectus») presented itself emphatically and with a belief in progress: «Across the land and sea the idea travels with lightning speed and electrifying power since the telegraph´s wire has connected the remotest poles of earth. That´s why this paper, which has dedicated itself to the enormous task of connecting the reader to all parts of the world through picture-telegrams, will be named Über Land und Meer. Since travelling has reshaped itself to a flight through vast lands, since the globe has strapped itself with an iron railway network, since the sea is being plowed by countless steamships, since the century´s greates invention allows us to even to fling ahead the thoughts of the boldest traveller, since we connected, beneath foaming waves, the continents through gigantic ropes, like tremendous nerves that tie the colossus´s separated organism together in order to simultaneously inform every part of the earth about every idea, since the endless planes of the desert, the palm groves of India, the ice regions of the North, the primeval forests of America are no longer considered as distances, literature has experienced a change like never before and maybe never again.

The mighty lever of journalism that seizes time´s ideas with tremendous power has experienced this change much more vehemently than has any other. The word alone was no longer enough for the act, mere account was no longer able to replace the idea. The eye wanted to see the real picture, word and picture had to combine in order to meet the proud intellect which had to be aware of East, West, South, and North in a single moment, to whom foreign parts had become as familiar as home, and who wanted to see embodied what his phantasy´s word had brought to his mind.

To meet those double demands of our time, to make what is and what happens clear in vivid pictures by using pen and paper, – that is what our paper has declared to be our task, and that is why the words Über Land und Meer are at its top.»

Due to a large number of texts and pictures the magazine was able to fulfill this program. It managed to «keep the reader up-to-date from week to week concerning everything that had become indispensable to know in a continuously growing field of knowledge of the present, the movements in all areas of the intellectual and material life, in literature, arts, science, culture, trade, statistics, technology».