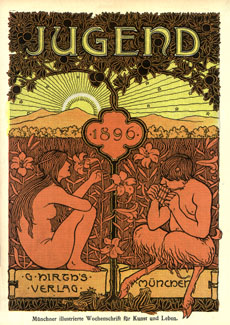 The Munich art and literature scene towards the end of the 19th century was colorful, heterogeneous, progressive – but without mouthpiece. Jugend was meant to be the platform the people were looking for. The Programm der Programmlosigkeit (Program of Having no Program) turned out to be a melting-pot which was open to all kinds of tendencies and which promoted numerous artists and writers.

Already during its first seven years the periodical featured more than 250 artists. All of them were still largely unknown, and all of them had an immediate relationship with Munich. For many artists, for example Max Slevogt and Ernst Barlach, Jugend was the first opportunity to present their works.

A considerable influence on the artistic presentation of the early volumes came from Arnold Böcklin and Franz von Stuck. Centaurs and nymphs, Eros, melancholy and death are recurring motifs and themes.

Against the will of its publisher Jugend was responsible for the naming of an entire arts-and-crafts and literary style, the Jugendstil. However, a description of Jugend based on the characteristics of the Jugendstil would ignore important aspects of the periodical.

It is difficult to classify Jugend among other periodicals, for it is artistic, humorous, satirical, critical, and universal. Satire and poetry can be seen as its most important literary genres. Among the writers mostly forgotten today are Georg Bötticher, Fritz von Ostini, Anton Alfred Noder, Karl Ettlinger, and Franz Kunzendorf.

Karl Ettlinger, the «old man from Frankfurt», worked for more than 20 years for Jugend. Under the pseudonym «Karlchen» he contributed with over 1,700 articles for the paper and was thus instrumental in developing the periodical's satirical standard.

After the death of its founder Georg Hirth in 1916, with an unstable management and during an economically difficult time after the war, the periodical was for a decade on the brink of discontinuation. From 1927 onwards, Jugend went through a period of modernization under the leadership of Franz Schoenberner. The all too provincially Bavarian and beer-happy atmosphere was replaced by a sharp intellectualism and a sceptical alertness.

Concise sketches by Hermann Kesten, satirical poems by Erich Kästner or angry articles by Kurt Tucholsky helped the periodical to a new profile. Small and nasty drawings by George Grosz, dark and fairy-tale like monsters by Alfred Kubin, and fragile dances of death by Mayrhofer met the macabre taste of the time.

It may be surprising that Jugend could be published up until 1940, and the question arises which concessions to the National Socialists had to be made. In the special issue «Tag der deutschen Kunst» (Day of German Art) appearing in 1937 the preface reads as follows: «When the German nation was divided, art presumed to break with its people and to lead an independent existence. When art frees itself from the pulsation of the people it will become unable to produce ethical values.» But the time of «morbid intellectualism», of «artistic aberrations», and of «uprooted intellectual life» was said to be over.

In order to survive, the once fresh and critical paper had long ago been forced to give up the goals and ideals of the time of its early days.