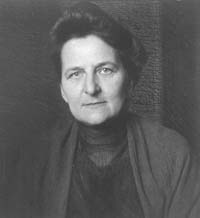 A free sample of the «Catalogue on CD-ROM» can be ordered from the publisher.

When the Union of Progressive Women's Associations (Verband fortschrittlicher Frauenvereine) was established in 1899, Kaethe Schirmacher, along with Minna Cauer, Anita Augspurg, and others, was among its initiators. Born on the 6th of August in Danzig, Kaethe Schirmacher grew up in the liberal political atmosphere of a well-to-do Danzig merchant's family. As a young woman, it appeared a self-evident task to her to transpose her personal pursuit of self-sufficiency, knowledge, and professional education into practical activity. By doing so, however, she met not only with massive obstacles due to the societal imagination of gender roles, but also opposition and a lack of understanding from her own family.

In the 1880s, through her work with the women's association «Frauenwohl», Kaethe Schirmacher came into contact with the civil women's movement, and soon found herself on its left wing. The following years were spent in periods of study in Paris and Zurich (where she, in 1895, received her Promotion under Richard Avenarius), in strengthening her contacts with the international women's movement, and in touring the United States for several months on the occasion of the 1893 International Women's Congress in Chicago. Her plans to apply herself to a possibility of studying and a scientific career in America, however, had to be abandoned due to health considerations. In the following years, Kaethe Schirmacher belonged to the organisational leadership of the International Women's Congress, and also filled the office of interpreter.

Countless contacts and friendships with leading personalities of the German and international women's movements resulted from these activities.

An unpredictable change in Schirmacher's political posture followed her early engagement in the left wing of the civil women's movement. From about 1904 onward, and above all under the impression of the political estimates of her personal Parisian surroundings, she executed a complete 180 degree turn from liberal feminism to a conservative nationalism, from which anti-semitic elements were not entirely lacking.

After an already long-drawn-out period of differing opinions and increasingly divergent political conceptions,
Kaethe Schirmacher took the occasion of a disagreement in 1913 over her interpretational activities to break with the German and international women's movements.

The national-conservative political camp, and to a lesser extent nationalistic sub-groups of the women's movement, were Schirmacher's most important points of reference in the following years. From Marlow, where she had from 1910 onward her primary residence with her life-companion Klara Schleker, she undertook lecture trips and composed works in her then-primary fields of interest: the politics of the Ostmark (the Eastern boundaries of Germany) and, with the beginning of the First World War, the idea of the conscription of women. In 1918, she belonged to the founders of the German National People's Party (Deutschnationale Volkspartei, DNVP). In 1919, as the Party's representative, she marched into the National Assembly, and thereby reached the pinnacle of her political career.

The 1920s, the last decade of Schirmacher's life, were marked by health problems and a growing feeling of embitterment and underappreciation. She renewed her efforts to treat questions of women's emancipation in her work – a rather problematic effort in her national-conservative surroundings.

Shortly after her 65th birthday, Kaethe Schirmacher betook herself to Obladis, and later Meran, for medical attention. She died in Meran on the 18th of November, 1930.

Lida Gustava Heyman, a companion of Kaethe Schirmacher's in the early years of her association with the women's movement, dedicated a eulogy to her. In this dedication, she refused to pass silently over the change in the political views of the deceased which the advocates of women's rights found so painful and difficult to understand: «On the occasion of her death, we remember the young Kaethe Schirmacher in warm friendship and gratitude. The struggle for the liberation of women was her most deeply internal experience, here she was immovably consistent, and knew no compromise. (...) Yet the older person did not hold to what the younger gloriously promised. Out of the enchanted, fresh, happy, hard-working warrior for the liberation of woman there emerged a chauvinistic, embittered, stingy woman filled with the spirit of Prussian militarism, whose whole being was foreign to us. So we see her: a glorious model for the youth, if they cared only to imitate her; but a bitter warning to the old. Even of the dead, one should speak the truth.»

The exploration of the historical women's movement is supported mostly by the abundant publications produced by that movement. Personal sources, on the other hand, which allow a glimpse behind the whole canvas, are rare and difficult to access.

With the publication of the Schirmacher Legacy, this situation is fundamentally altered. More than 450 manuscripts of her works, 55 notebooks and diaries, some 500 photographs, 5,500 collected pieces (of which 3,800 are newspaper articles), and 600 printed works, but above all a collection of letters1 totalling some 14,000 pieces, become available through the Legacy edition.

With a look from the inside, these documents open a new perspective, not only on the development of the women's movement at the turn of the century, but also on the collective political and social happenings between 1890 and 1930.

The Legacy includes 1,076 portfolios with approximately 22,000 pieces. It is made easily accessible by means of a CD-ROM catalogue. Individual pieces of the Legacy are also available on request.

1Among Kaethe Schirmacher's correspondents from the women's movement were, among others, Anita Augspurg, Gertrud Baeumer, Minna Cauer, Carrie Chapman-Catt, Lida Gustava Heymann, Helene Lange, Maria Lischnewska, Anna Pappritz, Auguste Schmidt, Helene Stoecker, and Marie Stritt. After her conversion to conservative nationalism, especially in her time as the representative of the DNVP in the National Assembly, several prominent spokesmen of the party-politics world also took part in correspondence with her.