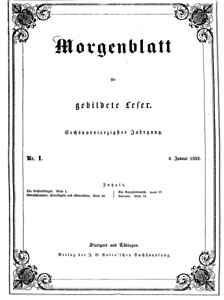 The Morgenblatt für die gebildeten Stände (from 1837 on Morgenblatt für gebildete Leser) counts as the most important representative of a new type of magazine which won the readers hearts' as early as the 19th century. Johann Friedrich Cotta himself came up with the idea and the concept for this periodical which appeared up to six times a week and the design of which was modelled on that of a newspaper. The enterprise soon turned out a spectacular success – not least due to numerous important staff members. Because the paper was published by one of the most influential German companies of the 19th century, hardly one important writer was missing on the list of employees – a fabulous constellation considering the attempt to establish the Morgenblatt as the leading literary and entertaining paper. Because of these celebrities the periodical even gave up its original plan to anonymously publish every article. However, Jean Paul's brilliant idea to anticipate an obituary note to the Morgenblatt already in the paper's first issue led to changes of this plan – as early as that the paper parted with the concept of anonymity.

The microfiche edition presented here is based on the issues from the Steinmeier Library as part of the Erlangen-Nürnberg University Library. Thanks to a chronological order of the periodical's individual parts, what this edition offers is an easy access rather than a complicated search.