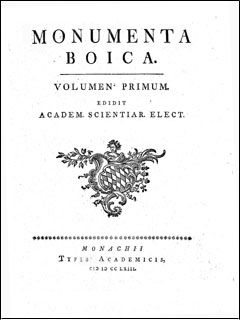 Monumenta Boica represent an important historical collection for the history of Bavaria. They count as one of the most extraordinary historical works by the Bayerische Akademie der Wissenschaften (Bavarian Academy of Sciences).

This collection of Bavarian monastic documents contains, on the one hand, purely ecclesiastical records such as papal bulls, letters of indulgences etc. On the other hand, there are also documents of secular content which, among many other things, give information on the Bavarian private and public law, on its feudal system, and its genealogy of princes and the aristocracy. With the Monumenta Boica the Bayerische Akademie der Wissenschaften managed to provide what, before, the courtly librarian Andreas Felic Oefele had already attempted with his Scriptores rerum Boicarum (1763): to combine historiography and documents. As extensive as never before the Monumenta Boica has thus made accessible historical sources of Bavarian history and has gained immense importance for the study of Bavaria's history.

Under the leadership of Christian Friedrich Pfeffel, the first volume of Monumenta Boica was published in 1763. Pfeffel aimed at mastering the enormous quantity of documents in order to make them available to historical research. With the help of numerous assistants plus the support of the Electoral Academy he and his successors managed to gain access to the monastic archives. In the beginning, the entire proccess was complicated because of mistakes which could mainly be attributed to great haste, a lack of training of the copiers and compositors plus the fact that the originals came from secondhand or even thirdhand places. Nevertheless, the editors of Monumenta Boica succeeded in developing their own principles of editing which led to the collection being praised as exemplary in its design and in its basic aim at copying from the best original which they could possibly get a hold of. This fact even led to the project inspiring others, such as P.W. Gercken, whose Codex Brandenburgensis can be traced back to the plan and realization of the Bavarian edition. «Never before a diplomatic work has succeeded in such a way as this extraordinary collection, which will do the founder of the institution, the deceased Elector Maximilian, great honor.» (Neueste Litteratur der Geschichtskunde, IV/1780,71)

Its status at that time for historical researches in Bavaria the Monumenta Boica have obtained until today. The monastic documents still count as the «main, even as the only source historical researchers can obtain their knowledge from» (Hormayr). The microfiche edition presented here helps to make both the access and usage to the documents easier.