It was Johann Carl Dähnert (1719–1785) who had the idea to a Pomerian scholarly periodical. What Dähnert intended was to «show a compendium of the works of Pomerian scholars focusing on the growth of sciences, and also to provide an opportunity for them to give samples of their insights, based on reasonable annotations and skilful expositions. And finally, there ought to be announcements of the most curious foreign writings.» Already around this time several similar periodicals also appeared in Göttingen, Erlangen, and Erfurt. 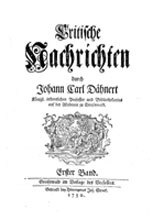 Because the periodical did not bring in the profit its publisher had expected, Dähnert had to finance the project himself from the second volume on.
Due to his editorial commitment, he was offered a position as librarian at Greifswald University in 1748. There it was imposed on him to continue publishing the periodical without any financial support. An attempt to purposely ruin the paper he even was prohibited by judicial power.
After a break of one and a half years Dähnert, in 1750, started a new attempt with the Critische Nachrichten (Critical News). With more than 400 subscribers the periodical was an economic success at first. However, organizational flaws and too much work finally led to the paper's end in 1754.

After a ten-years-break Dähnert's enterprise was saved in 1765 thanks to the financially well-off bookseller and publisher A.F. Röse. Under the new title Neue critische Nachrichten (New critical News) Dähnert took up his work and was paid author's royalties. But even to Röse it soon became obvious that the Greifswald periodical was more a lossmaker than that it made profits. When he was no longer paid the royalties Dähnert retired from editorial work. His position was then occupied by Johann Georg Peter Möller (1729–1807). In 1774 the publisher Röse once and for all parted with the periodical.

At his own expense, Möller continued publishing the periodical, this time under yet another new title: Neueste critische Nachrichten (Most Recent critical News). Because the losses he made were continuously balanced out by the university Möller was able to bring out the paper until his death in 1807.

For the study of the history of Pomerian literature the Critische Nachrichten are an indispensable aid: The literature of the entire Baltic Sea is presented here. And: in hardly any other paper Kant's writings, for example, were reviewd as early and as extensively as here.
Beginning in 1775, of all works published in Sweden the academic library in Greifswald had to be given one sample. The periodical thus became a major mediator for Swedish literature and thought. No other paper managed to give reports on this neighboring country as extensive, as early, and – for the most part – as qualified as the Swedish expert Möller did.